A winemaker, a viticulturalist and a grapegrower...

Hailing from Winnipeg, Manitoba, Canada, Wes’s career in wine began in 1992 when he spent the winter season snowboarding in the town of Whistler, BC. In order to keep his days free to ride, he found a job at a local steakhouse, thus igniting a love of food and wine.

Thirteen years later, having worked in most of Whistler’s top restaurants, he enrolled in the University of British Columbia’s new wine biochemistry program. While studying full time, Wes also worked whenever possible at Tantalus Vineyards with Aussie winemaker, and Riesling and Pinot Noir guru, Matt Holmes. After graduating in 2008, Wes was offered a prestigious position as an intern oenologist at the “Super Second” 2eme Cru Classé Château Léoville Las Cases in St. Julien, Bordeaux. He then moved to McLaren Vale and in 2011 accepted a position with the Australian Wine Research Institute, where he still works as a Senior Sensory Scientist.

Wes is an accomplished wine show judge, an alumnus of the prestigious Len Evans Tutorial, a graduate of Wine Australia’s Future Leaders program, and has completed a PhD at Charles Sturt University. Wes lives in Willunga with his partner Cassie and their 5 kids. He loves to ride boards (skate, surf and snow), is an accomplished ice hockey player and welcomes any opportunity to hustle you on the golf course. 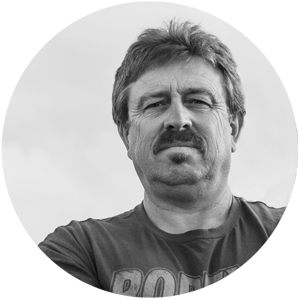 Peter Bolte and his family have had a very close affinity with the land in the McLaren Vale district for more than 170 years, with his ancestors arriving in South Australia on the “HMS Buffalo” in 1836.  By the early 1840s they had taken up land in Aldinga, and continue to farm the land to this day.

With farming coursing through his veins, Peter took up viticulture as a 15-year-old in 1977 and has been working as a viticulturist in the McLaren Vale wine region since. During this period, Peter has identified vineyards that consistently grow the best parcels of fruit in McLaren Vale and, as the original Dodgy Brother, is proud to share this wonderful fruit with you.

Peter is a passionate believer in the McLaren Vale wine region, and is adamant the best Australian wines hail from this area bordered by hills and the sea, south of Adelaide.

This belief led Peter to plant vines on his McLaren Vale property in 2001.

The vineyard has since supplied fruit to some of the region’s leading wine companies.

DODGY BROS:
NOT ALL THAT DODGY

A long time ago, Peter Bolte and his good friend decided they were going to make some wine. As a consulting viticulturist, Peter not only had the knowledge of what quality grapes were all about, but he also had the connections to be able to procure some of these grapes. As a well-known wine company would move through picking one of their top vineyards, Peter would swing a deal with the grower: “Mate, how ‘bout you leave the last row for me and I’ll take care of it.” This technique seemed to work well, and the deal was always sealed with a handshake.

With the advice of a few local winemakers, and some rudimentary winemaking equipment, the grape crush began, and the ongoing antics led to the nine-year-old son of Peter’s partner to dub them the “Dodgy Brothers”.

By July 2010 Peter knew he had to step up his game, enlisting Canadian winemaker Wes Pearson and grower extraordinaire Peter Sommerville to form The Dodgy Brothers we now know and love.

Throughout this evolution, Peter’s original ideals remain unchanged – the boys still like to have a good time, a good laugh or two, and they still seal all their business deals with a handshake.

A grower, a viticulturist, and a winemaker: The Dodgy Brothers.

Juxtaposed is about the Juxtaposition of my careers, as both a research Scientist and a winemaker. As a researcher I work in an environment that is rigid and structured, that fits in a box. As a winemaker it’s the opposite, as I’m free to be creative and approach things from outside the box, without the structure and formality of the research world. The ying to my yang.

The Juxtaposed wines are free from wines – they are not beholden to any rules or structure. They are simply expressions of a particular terroir or style. They are wines that are focused on suitability to our culture and climate first and foremost, as well as being expressions of the place from which they came. They are not manipulated or over handled. They are wines that the work is done in the vineyard, so that we don’t have to do any in the winery. And finally, they are honest wines that speak of the uniqueness and culture of the place they come from: McLaren Vale.